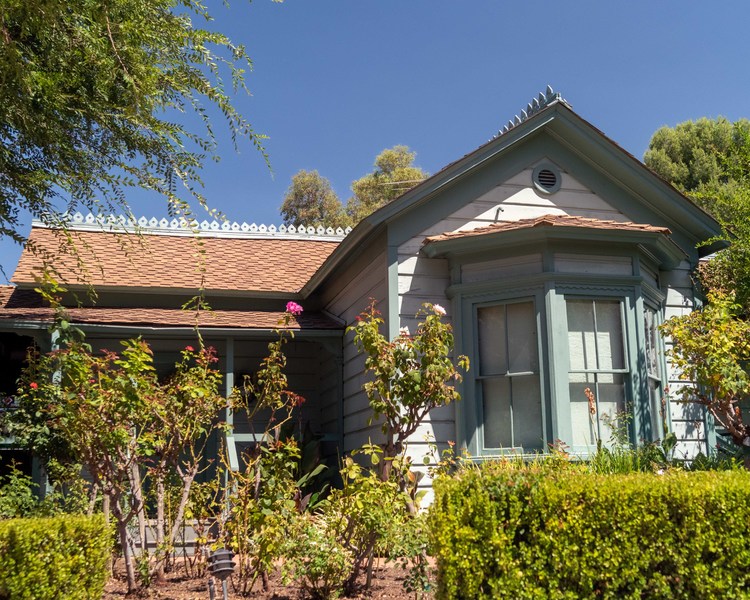 Until it was moved to the Leonis Adobe grounds in 1983, the Plummer House was known as the “oldest house in Hollywood.” The house was originally located in what is known today as Plummer Park and was designated California Historic Landmark 160 in 1935.

In 1874, the John Cornelius Plummer family homesteaded a 160-acre parcel in what today is West Hollywood. John Cornelius’s sons, John Jr. and Eugene, built a Victorian style family bungalow—today’s Plummer House—and took on the persona of Spanish dons, becoming Juan and Eugenio. Despite purported Spanish roots, John Jr. and Eugene Plummer were born to Anglo parents. Their English father, John Cornelius Plummer, was a sea captain born in Canada; and 1860 United States Federal Census Records lists France as the birthplace of their mother, Maria Cecelia Plummer. After the deaths of Captain Plummer and his wife, Maria, Eugene became the sole occupant of the home and gradually sold off land until only three acres remained, which were eventually purchased by the County of Los Angeles.

After the death of Eugene Plummer in 1943, the County allowed the Audubon Society to utilize the Plummer House as their headquarters until 1980. Despite being a California Historic Landmark, the house was nearly ruined by continual vandalism, including two fires that destroyed a large part of the Audubon Society’s archive. The Plummer House became an abandoned eyesore for the City of West Hollywood and they slated the home for demolition.