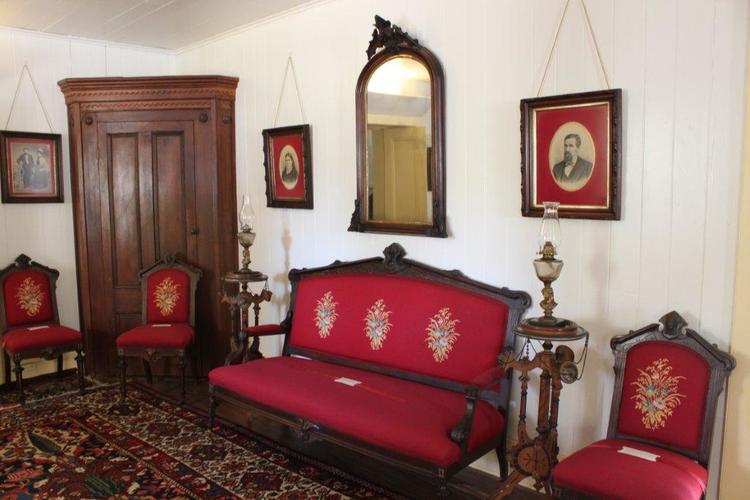 The living room was originally two rooms; remnants of the dividing wall can still be seen on the floor and ceiling. As listed in the 1889 appraisal of the estate, the two rooms were described as a parlor and a sitting room. After Miguel's death, the sitting room became Espiritu's siesta room where she kept family photographs and personal belongings. The tongue and groove redwood floor is original.

The large mirror next to the front door, as well as the two corner cupboards, are original to the Leonis Adobe. The mirror was originally located on the southwest wall where the dining room entrance door is now. The rest of the antique furnishings are not original to the Leonis family but are of the period (approximately 1870 to 1890). The doorway leading to the dining room was added by the Agoure family during their residency in the 1920s. During Miguel and Espiritu's time, the kitchen and dining room were only accessible from outside.

According to Maria Orsua, an adopted grand daughter, when Espiritu died she was laid out in the parlor in front of the mirror. In his log book, Espiritu's son, Juan Menendez, made the following entries about his mother:

On the 12th of April she was buried at 12 in the morning.