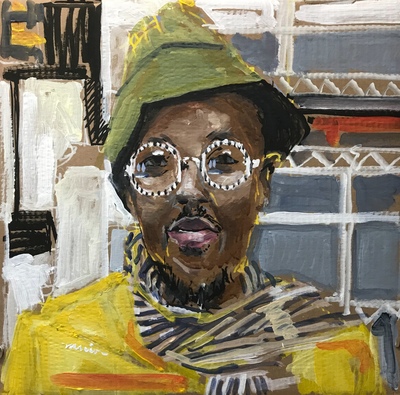 Rasheem is another inductee into this portrait project’s hall of fame.  Rasheem (@artdojointernational) is a clothing designer par excellence and I was honored to be able to paint him.  He came to our portrait session in full regalia.  I was so taken with his eyeglasses, scarf, hat and conversation, that I didn’t even realize he was wearing a SAMO varsity sweater until after our session when I took his photo.  Had I realized, I think I would have spent the whole session asking about Basquiat’s influence on his clothing designs.  I deviated with his portrait’s background in that I attempted to paint what I actually saw behind him instead of a plain or patterned background.