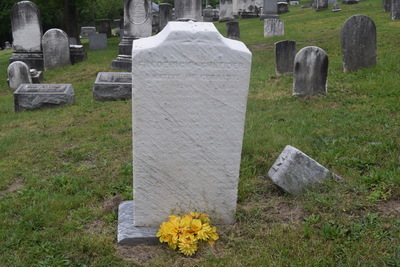 My eyes have looked on many landscapes over the course of my lifetime and much of my lifetime was marked by war. My birthplace, Hesse-Darmstadt, was marked by turmoil. Napolean laid claim to the region when I was one year old. My father, a mill owner, went to prison when he refused to provide flour and livestock feed to the army and was only released when he promised to supply those demands.

I was drafted into the French army when I was 29 and served there five years during the Napoleanic wars. I was captured and made a prisoner for five months before being released to return to civilian life.

I got married and had children and began milling, like my father had before me. My first wife died in 1827 and I remarried in 1834. Four years later, I gave up my mill and came to America with my family to start all over again in my 50s.

We arrived in New York and headed south to York, Pennsylvania. My sons and I heard of work available in Huntingdon, so we decided to settle there. We took laboring jobs, constructing a dam, but I soon turned my attention to farming.

Farming was successful for me and I found peace in it after so many years of fighting in my youth. I continued in that for many years until my death.
My children followed in my footsteps and established farms of their own in these same valleys.