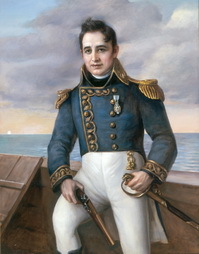 Joshua Barney at the Third Line

Joshua Barney, commander of the U.S. Chesapeake Flotilla, was a red-nosed and ruddy-cheeked, with sparkling black eyes.  The fifty-five year old Barney had a gentle face that belied his long and adventurous life at sea.  The Maryland native had fought as many, if not more, naval battles against the British as any living American, and he was eager for another fight.

Raised on a farm outside Baltimore, Barney had resisted his parents’ effort to setter him toward a respectable life in a mercantile firm, and instead gone to sea at age twelve.  When the American Revolution broke out he was already an experienced sailor, and at age seventeen he became the youngest captain of a Continental Navy frigate. Barney was taken prisoner three times by the British, dramatically escaping once, and the experience left him with a lifelong dislike of England. Barney had just retired with his wife in May 1812 to a farm outside of Baltimore, when word came that the United State had declared war. “To content himself with following the plough, watching the growth of his corn, or shearing his merinos, while the blast of war was blowing in his ears, would have been an effort beyond his philosophy,” his niece later wrote.

On independence day in 1813, Barney took up his pen and wrote a memorandum to Secretary of the Navy William Jones analyzing the British threat to the Chesapeake.  To fight back, Barney advised building a mosquito fleet of armed barges to ply the shallow waters of the Chesapeake, powered by oars and light sails. “Form them into a flying squadron… continually watching and annoying the enemy in our waters,” Barney recommended. In Baltimore, Barney worked for months building his flotilla.  Jones offered a benediction in early 1814, “Your force is our principal shield, and all eyes will be upon you.”

Back in Bladensburg, Barney saw the American militia flee in chaos and knew the British would not be far behind.  Soon he spotted a red-coated column of British troops cresting a rise on the turnpike.  The British continued forward, crossing a small bridge at the bottom of the ravine and moving up the hill.  But the British halted when they saw Barney’s big guns positioned on the road, and gingerly approached.  Barney held his fire until the enemy advanced to within several hundred yards, then ordered one eighteen-pounder cannon to fire.  A mass of deadly grapeshot cleared the road.