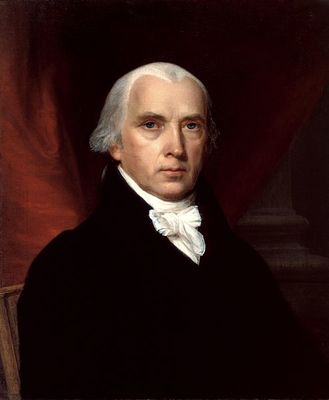 A cheer rose up from the American troops as President Madison arrived on the scene.  The president, accompanied by Attorney General Rush and James Smith, his servant, rode doggedly ahead, searching for General Winder, who he assumed was in Bladensburg.  In his haste Madison failed to notice that he had ridden past the American lines into a no-man’s-land between two opposing armies.

Madisons party was about to cross the bridge into Bladensburg when they encountered an American scout riding the opposite direction.  “Mr. Madison, the enemy are now in Bladensburg.”  Madison was shocked. “The enemy in Bladensburg!” the president repeated.  The president and his companions reined back their horses and dashed back toward the American lines - so fast that Rush’s hat blew off.  Not only was Madison the first American president to arrive on a battlefield, he had nearly become the first American president to be captured or killed in battle.

Also with Madison was Secretary of War Armstrong, a former senator and diplomat who had served as a staff officer with the Continental Army at Trenton and Saratoga, had a reputation for military expertise, which was needed at the moment.  Several cabinet members had deep misgivings about Armstrong, knowing firsthand his corrosive personality.  He was disloyal to the president, keeping him in the dark, misleading him, and maneuvering to look at Madison’s expense.  An air of political intrigue continually surrounded Armstrong, and many suspected, not incorrectly, that he was preparing to run for president.  Most disastrous was Armstrong’s refusal to defend the nation’s capital, which he steadfastly insisted would not be a target.

Francis Scott Key, riding on horseback and dressed in civilian clothes, arrived in Bladensburg ahead of the troops from Washington, accompanying his neighbor, Brigadier General Walter Smith, commander of the District militia.  Key was acting as a civilian aide to Smith.  Key helped Smith scout for positions to place his troops.  Key had no skills as a military tactician, but he at least knew the terrain around Bladensburg well from many visits over the years.  Winder, well acquainted with Key from Maryland legal circles, was annoyed by the presumption of his fellow attorney in telling him how to array his army.  Winder, impatient with the delay, quickly approved the plan and left Smith and Key to oversee the positioning.

Finally, Secretary of State James Monroe - soon to be President Monroe - was there attempting to organize troops in an entirely different manner than Key or Armstrong.  Tall and slim, with a full head of hair, the red-faced and rawboned Virginian remained full of vigor at age fifty-five.  With experience in the Revolutionary War, an impressive political and diplomatic career,  and even Governor of Virginia, Monroe was consistently looking to burnish his presidential credentials - as next in line in the Virginia dynasty, following in the footseps of Washington, Jefferson, and Madison.