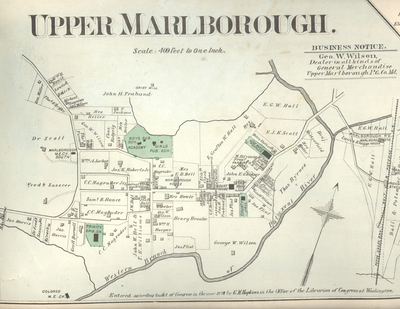 Homesick British soldiers found themselves transported back to Old England by the idyllic village of eighty elegant and neat houses nestled between green hills.  Graceful swells of land were laid out with fields of corn, hay, and tobacco, broken up by patches of old forest.  It all looked like home, down to the flocks of sheep grazing in the meadows.

The favorable impression of Upper Marlboro was furthered by the hospitality of Dr. William Beanes, who was among a group of citizens who greeted the British under a flag of truce.  The sixty-five-year-old physician, a major landowner and owner of a gristmill, was the leading citizen of Upper Marlboro.  His home, Academy Hill, built with proceeds from his flourishing medical practice, was the nicest in town, and British General Robert Ross selected it as his headquarters.

Beanes was a staunch Federalist, heartily opposed to President Madison and the war, and, according to the British, made little effort to conceal his feelings.  His Scottish brogue gave his visitors the impression that he was an emigrant to the United States, though he was a third-generation American and patriot who as a young surgeon during the revolution had treated wounded Continental Army troops in Philadelphia.

While the army camped comfortably in a large green field outside town, Ross settled in at Academy Hill.

Meanwhile, Secretary of State James Monroe dashed off a note to the president at 9 am and went to scout elsewhere, not realizing the British would veer toward Upper Marlboro.  “The enemy are in full march for Washington,” Monroe wrote. “Have the materials prepared to destroy the bridges.”  He signed his name, and then added a postscript: “You had better remove the records.” Monroe’s message, which arrived in Washington Monday afternoon, tipped the nervous city into full-fledged alarm.