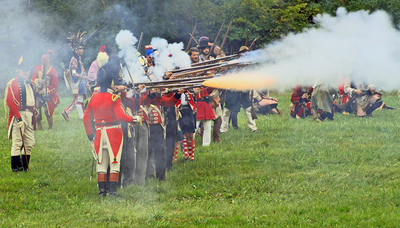 Surge Across the Bridge

Forces were converging on Bladensburg from all points on the map.  Militia and regular army troops, cavalry regiments, and artillery wagons clogged the turnpike from Washington.  The poorly conditioned citizen soldiers of the District militia were falling out of formation and lagging behind in the stifling heat, terrible even by the wretched standards of August in the Chesapeake.

Two columns of British troops trotted down Lowndes Hill “in a very fine style,” noted Major William Pinkney, watching from the American front line across the river.  Drum beat and bugles sounded as the enemy soldiers moved down the main street of Bladensburg toward the bridge, showing little fear, to the discomfort of the Americans. No one could explain why the bridge was still standing.  Brigadier General Stansbury had ordered a party of cavalry to destroy the narrow wooden span with axes  when the enemy drew near.  “Why this order was not executed I never could learn,” Stansbury later said.

When the British reached the foot of the bridge, WInder opened fire with the six-pound guns of the Baltimore Artillery.  After so long without any American resistance, the British seemed surprised by the barrage, and several fell.  Then Secretary of War Armstrong pointed out some activity across the river in the village, where an enemy detachment was setting up equipment behind a warehouse.  They were about to see the infamous Congreve rockets in action.

Resembling skyrockets, they could be launched from a simple tripod and were notoriously inaccurate, but this added an element of fear.  They flew at up to 200 miles per hour, hissing and roaring, trailing flames and smoke, sometimes changing direction in mid flight, and exploded with a thunderous clap, showering shards of metal or case shot.  For most of the raw American militia troops at Bladensburg, who had scarcely seen a cannon fire, they were weapons of terror.

British Colonel Thornton called “You see the enemy; you know how to serve them.” Galloping ahead, Thornton threw himself full length atop his horse and charged across the 120-foot-long bridge.  The men followed, tossing their haversacks onto the street to lighten their loads.  The Washington Artillery gun crews, with two six-pounder cannons planted on the road ahead, waited until the enemy filled the bridge and then opened up, firing solid shot at 900 miles per hour.  But troops filled the gap and moved forward, stepping over the bodies of the dead and dying comrades.  A stream of troops crossed the bridge.  More light troops emerged from hiding places in the village and dashed to the riverside.  It was a frightening sight for the American militia.