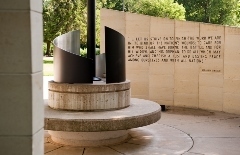 The Memorial honors the students who served in the Vietnam War.  In 1986, students launched a successful $22,000 fundraising campaign for the memorial. Construction began in August 1989 and the memorial was dedicated in November 1989.  The memorial features two semicircular limestone walls that are 20 feet in diameter. One of the walls bears the engraved names of 42 students who died in the war or who are missing in action. The other wall bears an inscribed quote from Abraham Lincoln. Benches and an illuminated flagpole rise in the memorial's center.

Southwest of the Vietnam Memorial is the William Grimm Memorial

It consists of a memorial oak tree and plaque.  It was dedicated in 1991 as a memorial to Capt. William D. Grimm, a member of the U.S. Air Force who was killed in action during Operation Desert Storm. Grimm graduated from the university in 1986 and is the only graduate killed during the war.