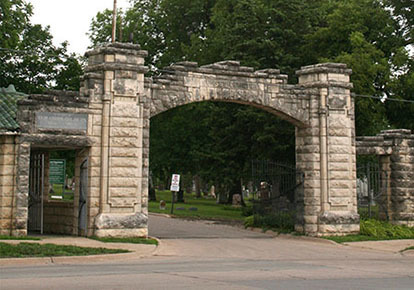 The memorial arch provides an entrance to the cemetery. A stone tablet above the left entryway is inscribed, "In Memory Of Our Union Soldiers 1861-1865 Erected By Womans Relief Corps And Citizens - 1917.”

Walk west through the arch, and after a few yards, you will discover a large cannon on the left side of the main road. This is the first of four stops inside the cemetery. Total round trip distance from the arch and back is approximately 1 mile.

Defenders of the Union Monument

The monument consists of a large stone base that supports the cannon. The base is inscribed:

In Memory Of The Defenders Of The Union.

The cannon is a 6.4" Navy Parrott Heavy Rifle. References indicate that it served on and sank with the gunboat Otsego which hit a mine in the Roanoake River on 9 Dec 1864. The cannon was recovered, but saw no further service.  The monument is surrounded by the graves of 20 Union Soldiers.

Continuing up the road you will discover the

The platform is just past the first small stone culvert, take first road on the left, before the Wareham mausoleum.  A plaque at the base of the flagpole is engraved: "Erected in 1934 by the R.B. Spilman Camp of the Sons of Union Veterans."

The platform is difficult to find as it is sometimes overgrown with bushes.  The first photo is from 2009, second photo was taken in June of 2017 and shows the current state of the structure.

The last two monuments in the cemetery are co-located toward the rear and against the wall close to MHS.  .4 miles or a seven minute walk from the platform will bring you to the two monuments: