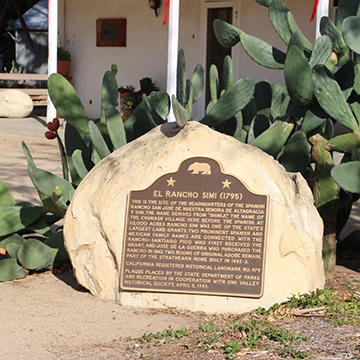 This site is California Historical Landmark Number 979 and is also on the National Register of Historic Places.

You may be wondering whether the familiar names of Pio and Andres Pico are connected to Santiago Pico.  They are!  They are Santiago Pico’s grandsons.

Rancho Simí was one of the earliest and largest Spanish or Mexican colonial land grants given within Ventura and Santa Barbara Counties and one of the largest given in California. The name derives from Shimiji, the name of the Chumash Native American village here before the Spanish.  The Simi Adobe, served as the headquarters of the rancho.

José de la Guerra y Noriega, a Captain of the Santa Barbara Presidio, who had begun to acquire large amounts of land in California to raise cattle, purchased Rancho Simí from the Pico family in 1842. After Jose de la Guerra's death in 1858, his sons continued to operate the ranchos. In 1865, the De la Guerras lost the ownership of this portion of El Rancho Simí.