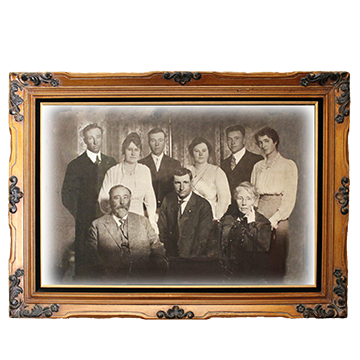 Here is a little more information about the Strathearn Family.  Robert Perkins Strathearn came from Scotland in 1873, at 21 years of age, settling first in Carpinteria, California. On November 7, 1879, Robert married Mary Gray Lamb and they moved to nearby Piru, where they had an orange grove and also began to raise cattle.  They bought their Simi Ranch in about 1889, which was approximately 15,000 acres of Rancho Simi lands, and moved here from Piru when the house was completed in 1892 or 1893. The front section of the house was built onto what remained of the old Simi Adobe.  This was the “Home Ranch” to all the Strathearns. The area around what is now Moorpark College was considered the “Middle Ranch”.

There were seven children; four sons and three daughters, born from 1881 through 1895. Their names were Bert, Jim, Jessie, Marion, George, Isa and Dave.  Dave (Sr.) was the only child born here in this house.

This land and house remained in the Strathearn family until the death of Marion and Isa in 1968.  The six acre parcel and the house were then donated to Rancho Simi Recreation and Park District to be preserved as a Historical Park in cooperation with the Simi Valley Historical Society.

Walk on the path towards the back of the Park.  On the right hand side you will see a boulder with California State Historical Marker Number 979.  That is our next stop.