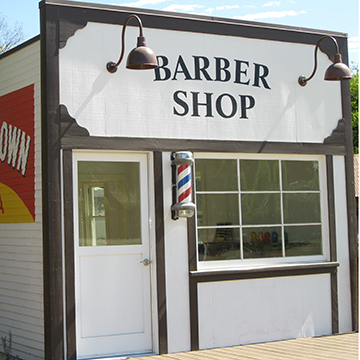 This is the Bañaga barbershop building.  This building, which was originally located on Los Angeles Avenue between Third and Fourth Streets, has had a varied past. It was first known as Dora Beach’s little general store in the early 1900s.  Women bought their sewing notions there, and children went there for penny candy.  It stood between other stores on the South Side of Los Angeles Avenue, the WS Keir Store at Fourth Street, and John Sawetelle’s Store at Third Street. This Bañaga barbershop building was always a part of  “downtown Simi.”

After Dora Beach’s store, the building served a variety of purposes.  In the 1940s it was briefly a residence; then it was a chiropractic office.  For a short while it was a meeting hall for Jehovah’s Witnesses.  There was even a café at one point.  All these uses were prior to the 1950s.

Beginning in 1958, Manuel Bañaga Jr. operated his barbershop in this building for almost 50 years, until 2006.  In April 2007 a pickup truck and a flatbed trailer were all that was required to relocate the building from its old location between Midas and Bob's Transmission on Los Angeles Avenue to Strathearn Historical Park.

Many long time Simi residents who visit Strathearn have memories of getting haircuts in this building.

Exhibits in this building include a fearsome looking permanent wave machine and antique implements which were used by beauticians and barbers.  The beige barbers chair in the barbershop belonged to Manuel Bañaga Jr.