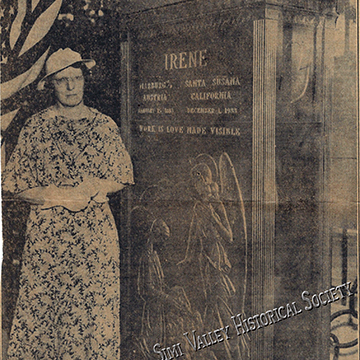 This structure is called The Hirschi or Dante-Irene Monument. It is technically a ‘cenotaph,’ which is a monument erected to a deceased person, whose remains lie elsewhere. It was moved to Strathearn Historical Park from its previous site owned by the Woman’s Club in 1971 to save it from demolition.

Irene Hirschi died in 1933. Mr. Hirschi asked the Woman’s Club in Simi Valley, where Irene had been an active member, whether it could be erected on their property behind the current Cultural Arts Center. They agreed.  On Easter of 1936, the Cenotaph was unveiled. It was a six foot high bronze monument that rested on a slab of Italian marble. It was surrounded by a wrought iron fence, which had metal chains on three sides. There is a small metal door near the top of the monument that bears the inscription “The Divine Message” which opens to reveal several photos.  There are many symbols which are references to the medieval poet Dante’s The Divine Comedy.

There is so much symbolism associated with the Monument that it becomes complicated to explain it all.

Much more information about this monument can be found on our website simihistory.com.  There is a webpage dedicated to this monument which is the object of intense curiosity for some.  The webpage, which is located under the ‘Park Tour’ tab has detailed descriptions written by Mr. Hirschi of this monument.

The next stop is the Simi Library building, which is the small white and green structure near the Hirschi Monument.