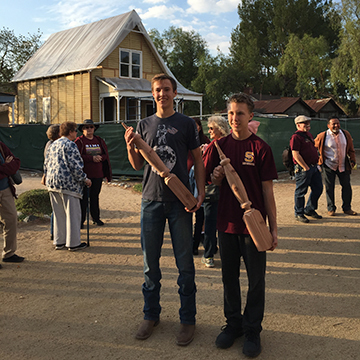 The Printz-Powell house was moved to Strathearn Historical Park on April 6, 2018, from where it was originally located at Second and Pacific Streets.

Prior to moving his family to Simi Valley, the original owner, Charles Printz, had been a land agent in Los Angeles for Simi Land and Water Company.  His wife, Rosabella Printz, was the Simi postmistress for many years. The Printz family owned two identical colony houses next door to one another, just like you see here.

Kerosene oil lamps were used to light the houses in those days.  Each lamp had a flame inside a glass chimney, and a wick soaked with kerosene from the base was lit with a match.  In February 1905, Bessie Printz was given a dollhouse for her birthday.  She was playing with her gift upstairs in the family’s original home, when she accidentally knocked over the kerosene lamp.  The curtains caught fire, and within minutes the house was lost.  The family then moved to the identical house next door and continued to operate the Post Office from the side porch in their new home, which we now call the Printz-Powell Colony house.

There was no sign on the house indicating it was the Post Office.  The Simi residents knew where the Post Office was located, and newcomers were told to “just go up and put your letter through the slot in the door.”

When rural telephone service was brought to Simi in 1909, telephone central was also placed in the Printz Colony House.  Rose and her daughters Gertrude, Frances, and Bessie, operated telephone central, which consisted of four telephone lines, with several parties on each line.

The Printz Colony House served as the Simi Post Office from 1904 to 1941.  Family members lived in the house until February 1984, when Bessie Printz sold the property to Larry Powell.  Mr. Powell purchased the Printz Colony House with the intent of preserving its heritage.   After acquiring the house, he stated that he intended to donate the building to Strathearn Historical Park and Museum when the time was right for him to do so.  He personally used it as his residence from 1984 until the house moved to Strathearn Park in 2018.

If you look to the peak of the house, you can see the finial that was fabricated by our local high school students, and placed atop the roof.

The next stop is the Hirschi Monument, which is tucked behind the two metal sheds.  Walk past the metal sheds, and then turn left to find it.