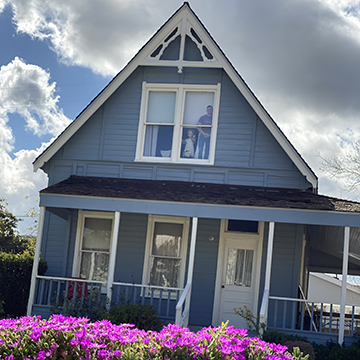 This Colony House, originally located on Second and Ashland, was the first historic building brought to Strathearn Historical Park soon after its formation in 1970.

This particular Colony House has had several owners.  Henry and Grace Haigh owned it from 1904 to 1909.  John and Mary Talley owned and lived in it the longest, from 1924 to 1961.  Just before this house was moved to Strathearn Park in 1970, it was the parsonage for the Missionary Alliance Church.

On the porch you can see a diorama depicting the early business district on Los Angeles Avenue.

The next stop is the Printz-Powell Colony house,  which is the yellow house right next door and our newest addition to the park.  These two colony houses are the only ones that remain of the original twelve that were shipped to Simi from Chicago in 1888.