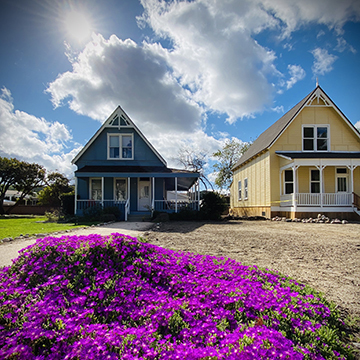 When Simi Land and Water Company was formed in the late 1880s to oversee the subdivision of the Simi Rancho lands for the first time, advertisements were dispersed throughout the country.  The ads reached the midwestern and New England states, which is where many of our early pioneer families came from.

These ads were more than a little "fanciful," as they showed the Simi Creek as a flowing river, with a paddlewheel steamer on it, and a man pulling out large fish. More than one buyer was lured by the promise of fishing nearby.

In Chicago, a group of investors composed mainly of doctors, thought they saw a marvelous opportunity to buy western lands, so they formed the California Mutual Benefit Colony of Chicago, which was soon shortened to The Colony.

The 'Colony Houses' take their name from the investor group, and have nothing to do with the 'colonial era' in the United States. Back in those days, when individuals went en masse to settle in a new geographical area, it was called a 'colony.'

They arranged to send twelve prefabricated houses (pre-cut and partially assembled) to form the nucleus of the new little town, which they gave the grand name, Simiopolis.  That name only lasted about six months before it was shortened back to Simi. These particular homes were manufactured by the T.W. Harvey lumberyard in Chicago, not Sears Roebuck Co.

All but two of the Colony Houses were located in the town site laid out by the colony.  The houses probably only cost a few hundred dollars, and the company, as a special inducement, paid the freight on houses ordered before October 1, 1888. The first group of colonists left Chicago on November 8, 1888, for their trip west by rail. Bessie Printz said her parents described watching the houses being loaded on railroad cars in Chicago. At this end, Frank Bither hauled them by wagon from Saticoy, the closest rail point at that time. Simi Land and Water Company had built a three-story hotel at the east end of Simi Valley (at approximately the location of the present west parking lot of the Simi Valley High School), to accommodate their prospective buyers. Some of those first arrivals stayed at the hotel, and others lived in tents near their property. Unfortunately, their settlement plans did not go well from the beginning.  There were no stores, roads or utilities of any kind, and the houses were not ready to be moved into.  Some folks did not stay long, but others did, and they helped to get our farming era off to a very sound start during those next fifteen or twenty years.

The next stop is the blue colony house, which is called the 'Haigh Talley Colony House.'