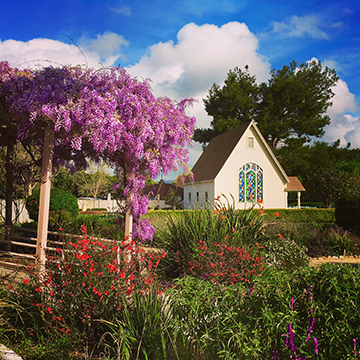 School and church were the basis of most community activities from the beginning of the Simi Colony, which was the first neighborhood and business district in Simi Valley. At first, church congregations met in homes, such as a Colony House which you will see in a future stop, or people had to travel Iong distances, to where there might be a preacher to conduct services. There were no Catholic services in the area at the time.

The Presbyterians formed a congregation in 1898, and finally, in 1902, they were able to build this small church building at Third and Pacific Streets.  However, neither the Presbyterians nor the Methodists could afford a full time preacher, so everyone attended church wherever there was a minister that day.  By 1908, the Presbyterians gave up hope of having a separate church, and went back to the community church in an old Colony House.

Not long afterwards, this small building became the home of the Catholic congregation.

The new 900 seat Saint Rose of Lima Church on Royal Avenue was opened in 1964, and the growing congregation moved to its much needed new larger home.

After the move, this church building was purchased from the diocese by Armando and Ramona Bañaga.  In 2002, the park district bought the building from the Banagas and moved it to Strathearn Historical Park and Museum.

The next stop will be the Strathearn House, which is the white house in the middle of the park, surrounded by the green picket fence.