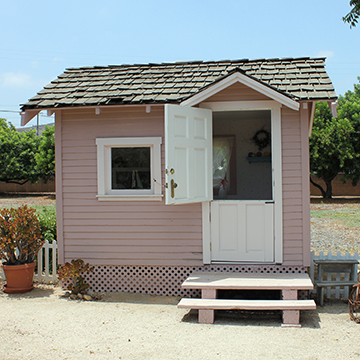 The Wayne and Eleanor Montgomery house was at the southeast corner of Cochran St. and Erringer Rd. In the early years of the Montgomery ranch, they grew grain, planted various fruit trees, and finally they raised cattle.

The family home was a small cottage at first. As the family grew, so did the house. Their first two children were girls, so, in 1924, an 8 by 10 foot playhouse was built for their daughters to enjoy. It was furnished with Eleanor's childhood furniture.

After the death of her husband Wayne, Mrs. Montgomery decided to donate five acres of their land to the United Methodist Church. She built a new house nearby on a street to the east that she named Wayne Circle. She then had the little playhouse moved to the new location so her grandchildren could continue to enjoy it. That is where it sat for the next thirty years.  When the Church purchased the land in the year 2000, the playhouse was moved to Strathearn Park.

If you look to your left, you'll see a display that includes a bell.  That is our next stop, the Santa Susana Corner.