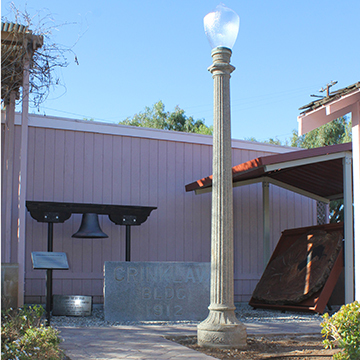 The Santa Susana corner features historical items from the east area of Simi Valley that was known as Santa Susana located near Los Angeles and Tapo Street.  Santa Susana sprung up in the early 1900s when a train station was built there.

In this corner you will find the slab of a heritage oak tree, the Santa Susana school bell, the Crinklaw Title Stone, and the Casino Mexicano cornerstone.

The Heritage Oak slab is that of a California Coast Live Oak. This preserved slice of the tree which was felled by disease in its original location, is believed to be between 300 and 500 years old and was declared a county landmark by the Ventura County Cultural Heritage Board.

The Bell you see is from the original Santa Susana school and was used to call the children to class.

The Crinklaw building was built in 1912 by Horace Crinklaw.  It was located east of Tapo Street on Los Angeles Avenue and housed several retail businesses. Unfortunately, the building was destroyed in the 1971 earthquake.

The Casino Mexicano Cornerstone was laid on Cinco de Mayo 1930.  The casino was intended to serve the increasing Mexican population in Simi Valley, and was more like a recreation community center than a casino as we think of them today. Only four rows of bricks were laid before the effects of the Great Depression were felt and it was never completed.

The light posts that you see are two of many that were to be placed on Los Angeles Avenue as part of a planned subdivision.  These plans were abandoned along with those for the Casino Mexicano around the time of the Great Depression.

Walk back to the Park's main pathway and turn left towards the white structure with the beautiful stained glass window.  The next stop is the original Saint Rose of Lima church building.