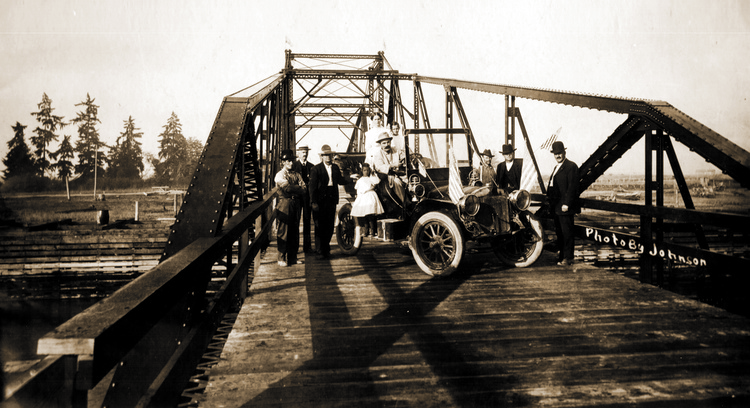 Welcome to our Year Round Stanwood Camano Historic Sites Audio Tour.  We are starting at Pioneer Highway and Main Street (271st Street NW) where our local clubs and chambers of commerce have been making a bid for tourists for almost a hundred years.  In 1935, knowing the lure of the river, the beaches, and fish to be caught, there was a plea for better roads through the Twin Cities to Uts-a-laddy and naming the road “The Playground Highway.”  This beautification project included planting evergreens and ash trees along the highway and the re-do of Ravenna Triangle off of Pioneer Highway, which filled an open ditch and planted shrubs to make an attractive green spot at the entrance to the two towns.

The railroad in East Stanwood was completed in October 1891 and the train station was built soon after.  It stood for almost 80 years until service was stopped in 1971 and the neglected train station was demolished a few years later.  Up on the hill is the condensary plant which was built in 1914 and has played an important role in Stanwood’s history.  The mansion up on the hill was built in the Spring of 1914 by Henry C. “Klondike” Anderson, who made a fortune at the Klondike Gold Rush and used his money to help establish Stanwood.

One of the earliest buildings in East Stanwood was the People’s Union, built in 1903, and it is still standing and is Stop #1 on the tour.  The northeast corner is best known as East Stanwood’s Busy Corner.  In 1911, Alan Bartz, built the new Hotel Bartz on the southeast corner, which stood for years and then was broken up into individual shops.

The 1918 Mercantile, which is still standing, has a unique history which can be found on the blog of Stanwood Area Historical Society’s website, www.sahs-fncc.org.  There is a newspaper article that explains how there could be no grand opening of the store due to the Spanish Influenza Epidemic.  There are many other buildings in East Stanwood that have a story to tell, like the N.V. King Building 1921, the Gunderson Building, the Hotel Bartz and the Pastime Pool Hall just to name a few.

As you continue down Main Street (271st Street NW), you pass Giard St and then Lien Street.  The Giard Family owned and farmed much of the land south of Main Street and the Lien Family owned and farmed much of the land north of Main Street.  The Giard’s sold some land to the Catholic Church, which was built along Main Street in 1908, and the Lien’s sold some land to the Lutheran Church which was built in 1892 after the great fire in downtown Stanwood.  The Lien’s also sold land to the school district, who built a new high school in 1939 right in the middle of Stanwood and East Stanwood, who were separate and competing towns from 1922 until 1960.  This building is now the Middle School, but it served as the Twin City High School from 1945 until 1962 and has a unique history of consolidation.  Across the street are numerous 1920s Craftsman homes, which also have wonderful family histories.

The Liens also sold land to the Stanwood Library, who is getting ready to celebrate its 100th anniversary.  The library was dedicated in January of 1922 and was originally in the Stillaguamish Band House, which was donated to the City by the band.  When they outgrew that building it was moved to 64th St and is still the home of the Twin City Sportsman Club.

Hamilton Lumber was established in 1945 at the location of Clough Lumber, who had taken over from the Wisconsin Timber Company.  In 1954, Hamilton Lumber opened a new, all-electric sawmill; however they suffered many fires over the following years.

As you veer left following Main Street (now 270th Street NW), on your right is the Nils Lien House, bullt in 1893. Homes on the left are the homes of Nils Lien’s sons and on the left you will see the Sons of Norway building, one of the oldest in Stanwood and across the street is Stop #2, the S.A. Thompson House.

As you continue on the old brick road, laid in 1912, there are many buildings still standing.  On the left is the 1903 Stanwood Hardware and across the street is the site of the 1915 post office that shared the building with a millinery store.  On the corner of Main Street and Union St is the First National Bank, built in 1930 in the middle of the Depression, by consolidating two existing banks into a national bank.  Across the street is the 1931 home of Stanwood Motors, now called the Camwood Plaza.  Next door to the bank is Hartney’s Style Shop, a well-loved haberdashery in Stanwood built on Main St in 1923.

At the corner of Market Street (102nd Ave NW) and Pearson Street (271st Street NW) is the D.O. Pearson House built in 1890 and the 1902 I.O.O.F. Public Hall, Stops #3 and #4 on the tour.  This complex is owned and operated by the Stanwood Area Historical Society, an all-volunteer 501(c)(3) corporation in Stanwood, Washington.

Continuing west on Pearson Street (271st Street NW) turn left at Oliver Street (102nd Drive NW) and you will come to Stop #5, the Stanwood Volunteer Fire Department, now the home of SAAL Brewery.  There is a video on this site and a restaurant if you are taking the tour. Across the street is the Stanwood City Hall, built in 1936 with the help of W.P.A. and still serves as our City Hall.

Now you take Hwy 532 west across the bridge to Camano Island.  For the full experience in person you will need the Discover Pass. There are nine stops on the island, starting with Stop #6, the Camano Lutheran Church built in 1903.  As you continue on Hwy 532, you take the left split at “Terry’s Corner” and go down the east side of the island.  On your right is Stop #7, the Camano Lutheran Cemetery.  Further down East Camano Drive on the right is Stop #8, the Kristoferson Farm.  Continuing down East Camano Drive and turn left on Russell Road and then right on Sunrise to the end of the road and you will come to Stop #9, Barnum Point Preserve.

Head south again on East Camano Drive which turns into Elger Bay Road and take a right at Mountain View Road. Heading west, take a left on Lowell Point Road and drive down to Stop #10 Camano Island State Park.  Return north on Lowell Point Rd and take a left and continue north on West Camano Drive to the Cama Beach Historic State Park, Stop #11.  Further north on West Camano you will come to Camano City, one of the first cities on the island.  After you pass the Camano Island Inn, turn right on W. Chapman Road and right on Orchid Road to Stop #12, the Camano City Schoolhouse.

Most of the stops on the island have videos about their history at www.historicsitestour.com.

“Travelers drive under green canopies of shade trees on narrow lanes leading from the island-circling Playground Highway to the beaches. Quiet country roads are bordered by wildflowers and weathered buildings, contrasting sharply with streamlined farms.”