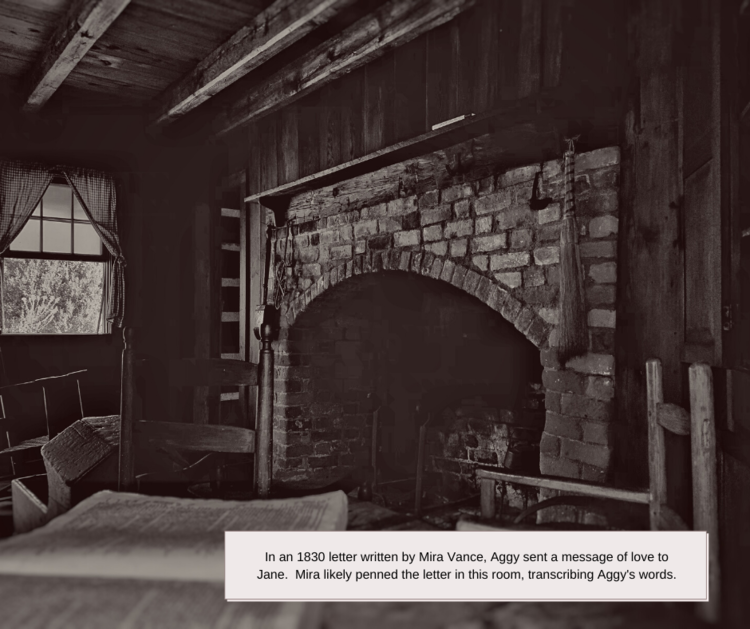 Priscilla Vance willed Jane to her daughter, Jane Vance Davidson, in 1835, although Jane was already living with the Davidsons in Bedford County, Tennessee.  David Vance Sr. did not mention Jane in his 1813 will, meaning she was likely born after his death.

In 1830, Aggy included a message to Jane in Mira Vance’s letter to Margaret Davidson, sending love and updates to Jane in Bedford County.  Perhaps Jane was Aggy’s daughter, granddaughter, or niece.  Whatever their relationship, the two women were able to communicate across hundreds of miles to maintain their connection.  Unfortunately, we do not know what happened to Jane after 1835.

In 1835, Priscilla Vance willed Wilson to her daughter, Sarah Vance McClean, although he was already living with the McLeans in Logan County, Kentucky.  Wilson later moved with the McLeans to Rutherford County, Tennessee.  In her 1830 note to Jane, Aggy also sends her love to Wilson, who lived close to Jane in Tennessee.  He might have been her son, grandson, or nephew—or just a beloved friend.  He also maintained a relationship with Jane, who was able to relay Aggy’s message of love to Wilson in 1830.