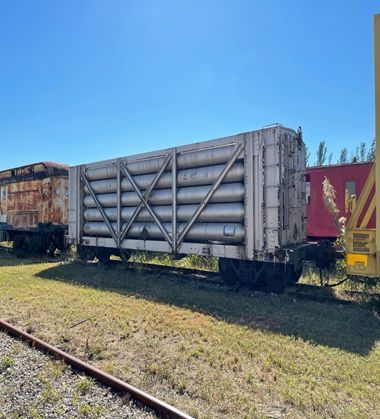 The helium transportation freight car #1202 was built in 1962. The car was purpose-built for the U.S. Department of the Interior Bureau of Mines. It transported high pressure helium from production wells in Texas to various U.S. facilities. This car is like those which brought Helium to this location for use in the 25 non-rigid airships based at Naval Air Station Richmond during WWII.

The car was most recently used at The Kennedy Space Center. The museum’s Alco Switcher NASA #1 moved this car, along with others, on the Space Center property. Very few of these cars were produced and are rarely seen by the public.

The Helium Transportation Freight Car Number 1202 was donated by NASA in July 2002. It is currently not operational but on display for visitor viewing.