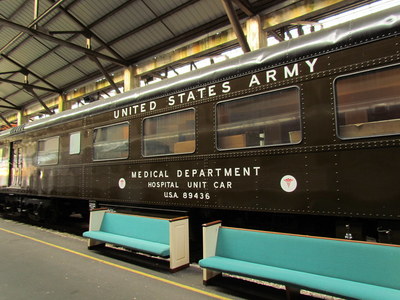 During World War II, the U.S. Army Hospital Car eighty-nine four thirty-six operated as a hospital car or "moving hospital." The car was built to carry one doctor, two nurses, four service personnel, and up to 33 patients. Its primary use was to move military patients between medical facilities.

The hospital card was originally built in 1945 by the American Car and Foundry Company as a government order of 100 of these cars.The car was declared surplus in 1969 and was acquired by the museum though the State of Florida Federal Surplus Program.