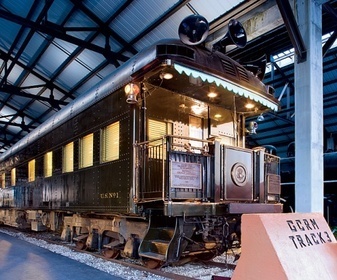 The Ferdinand Magellan is the only car ever custom built for the President of the United States in the 20th century. One other was built for President Lincoln in the 1860's, however Lincoln refused to ride in it calling it "too fancy and ornate." The car was used to carry the president's body for burial after his assassination.

In early 1942 after US involvement in World War II, it was decided that the President should have a custom built railroad car to afford him maximum protection. Originally built in 1928, the Ferdinand Magellan was one of six cars named after famous explorers. Rebuilt by the Pullman Company's "Calumet Shops", near Chicago, a dining room and observation lounge were added, nickel-steel armor plate was riveted on the car and bullet resisting glass was installed.

Two escape hatches were built, one in the ceiling of the observation lounge and one in the Presidential bathroom. A heavyweight Pullman car of the Magellan's era weighed 160,000 pounds.The rebuilt Ferdinand Magellan weighed 285,000 pounds. At 142 and one half tons it is the heaviest passenger railcar in the US.

The Ferdinand Magellan is the only passenger railcar ever designated a "National Historic Landmark", by the US National Parks Service in February 1985. Guided tours of the Magellan are available for purchase in the museum store, allowing you to explore the inside of the Magellan and it's hidden secrets!