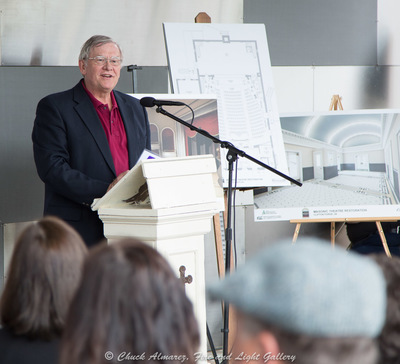 The auditorium was named after John Hillert at a ceremony on July 1, 2017.

John moved to Clifton Forge in 2006 and championed the renovation project by interviewing over 100 citizens to obtain the general consensus that the Theatre must be saved.

He and local attorney, Meade Snyder, formed the Masonic Theatre Preservation Foundation in 2009 and John worked tirelessly to obtain funding for the renovation.

He was very involved in the reconstruction and was present at the Grand Reopening on July 1, 2016 before being diagnosed with stage 4 inoperable non-smoker’s lung cancer.

He passed away on May 18, 2017 but he was aware the Theatre auditorium was going to be named the John E Hillert auditorium in his honor and memory.

In fact we have begun a one million dollar fundraising campaign this year titled, The Historic Masonic Theatre, Heart of the Community, Fulfilling the Vision of John Hillert.

The campaign is to raise money for Theatre Partnership, Preservation and Programs.

The majority of Theatres in this country raise about 40% of their operating costs through ticket sales and rental opportunities and 60% is raised through fundraising campaigns.

The “Heart of the Community” campaign emphasizes how one person can make a huge difference by never forsaking your dream—and we all can be that one person to keep this Theatre vital, with our support.

John’s biggest concern before he died was that we needed to be vigilant about keeping this Theatre strong and healthy in the years to come.

And as you see as you tour, this Theatre is so much more than an arts venue—it was a gathering place for the community from the day its doors opened and is even more so today.

And it is important that we PRESERVE and not let the Theatre ever fall back into disrepair.

AS you'll see next, the amount of work required to return this auditorium to its former glory is nothing short of remarkable.