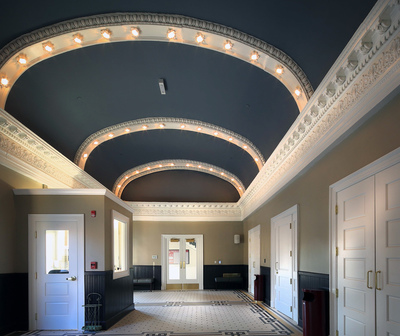 The lobby has always been used as the Theatre’s entrance.

The ticket booth was in the center as it is now, and concessions used to be sold in the Lobby.

You used to walk into the Lobby to the smell of popcorn popping and a counter was in the corner for people to buy their popcorn, candy and drinks.

We still use it as an entrance and occasionally sell concessions in the Lobby, but our main concessions areas are in the Annex and in the Underground.

Look up at our cove ceiling and notice the breathtaking plasterwork and lighting.

You'll immediately notice the plaster flowerets around the light bulbs.

Most of the flowerets were broken and a historic plasterer made a mold to repair them.

And the new LED light bulbs we installed during the renovation are programmed to chase in sequence when desired.

The Department of Historic Resources would not allow us to repair the nicks and dings in the plaster because they are a historic element.

Below you, the tile floor while not original, is a representation of the mosaic tile work in the early 20th century.

We have little pictorial history of the Lobby that has survived.

We have one photo from the 30’s that shows a wooden floor.

In the middle of the lobby is the Ticket booth. This was the primary ticket location when the theatre first opened.

The ticket booth has been put back in its original location in the center of the Theatre entrance.

The elevator is new, to meet building code requirements: there were no elevators in the building when it first opened.

The naming rights to the elevator were secured with a donation from the Clifton Forge High School Alumni.

They held a contest to raise money for the elevator—the different alumni classes competed against each other to raise a total of $50,000 for the naming rights (AND WE HAVE NAMING OPPORTUNITIES ALL OVER THE BUILDING).

Beside the elevator is the new box office, our primary customer service office.

The double entrance doors going into and out of the Theatre are in the original location but are new.

You can see the difference in the doors if you look at our front doors, which are original.

Compare those original doors with the new entrance doors to the auditorium.

The difference is clear.

Having discussed the Lobby, we’ll move on to the Annex next.

Please walk around the buildings main carpeted stairwell and proceed to the Annex.