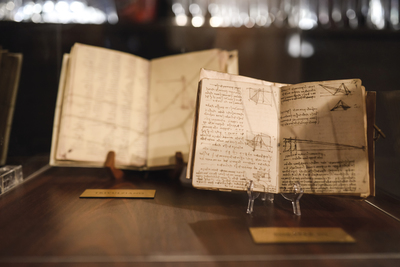 Leonardo's thoughts, inventions and observations are found in his handwritten manuscripts, of which over 6,000 pages survive. It seems that Leonardo planned to publish them as a great encyclopedia of knowledge, but like many of his projects, this one was never finished.

Leonardo da Vinci's notebooks probably started out as just a way for him to improve the quality of his paintings. Somewhere along the line, however, the books became more than that. They became a record of his life-long fascination with nature and his genius for invention.

After his death, his notebooks fell into the possession of his favorite apprentice Francesco Melzi, who held onto them and kept them safe until his own death in 1579. Melzi’s heirs had less respect for the material, however, and sold pages off to collectors or gave them away to friends.

In 1630 Pompeo Leoni, a sculptor in the Court of the King of Spain, got hold of much of the material and tried to organize it by subject. This, unfortunately, resulted in the books being taken apart and the original order, which might have told us much about Leonardo's thinking, was lost. Each of the new books created by this process was a Codex. Presently there are ten known codices containing Leonardo's sketches. Over time most of the notebooks have found their way into various museums, archives or libraries around the world. Only one is in private hands, owned by Bill Gates. Two were totally unknown until 1966 when they were found by chance in the National Library of Madrid.

Clearly the notebooks were written for Leonardo’s own personal use. The organization is minimal. The lettering is quick, sloppy and often without punctuation. If you were able to read through them you will see a range of entries including “to do lists”, budgets for the week, sketches of people’s faces, notes of his thinking at a particular time, mixed with his designs and inventions.