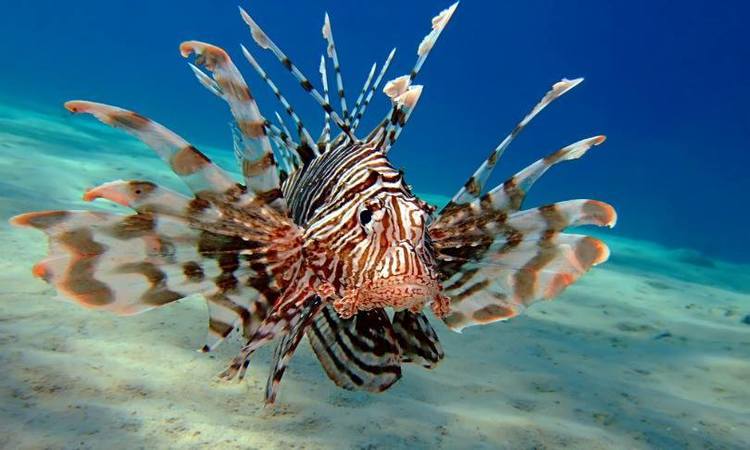 These beautiful fish have beautiful flowing dorsal spines and wide pectoral fins that may resemble the regal mane of the male lion. Though, you might not want to get too close, its spines deliver a powerful, venomous sting!

Much like its namesake, the lionfish is the king of its ecosystem! It is native to the Indo-Pacific waters but has become an aggressively invasive species in the western Atlantic Ocean and Caribbean Sea. With no known predators, its population is steadily growing. Not even sharks go after these ornate invaders!

Lionfish are harmful to coral reefs and have been shown to destroy the wellbeing of other native marine life. This is the second tank in a 2-tank display. Lionfish will eat all the other fish in the area so although it appears that they share a tank with other species, these are actually two separate tanks.

Also in this exhibit you may see a long spine porcupinefish. The unique features of this fish give it protection against predators. When threatened, it will fill its body with air or water, which makes its body swell like a balloon. This makes it too large to fit into the predator’s mouth and the extended spines make it even less desirable. The teeth of both the upper and lower jaws of this fish are fused, forming a solid, heavy beak, making cracking the shells of snails, sea urchins and hermit crabs easy.