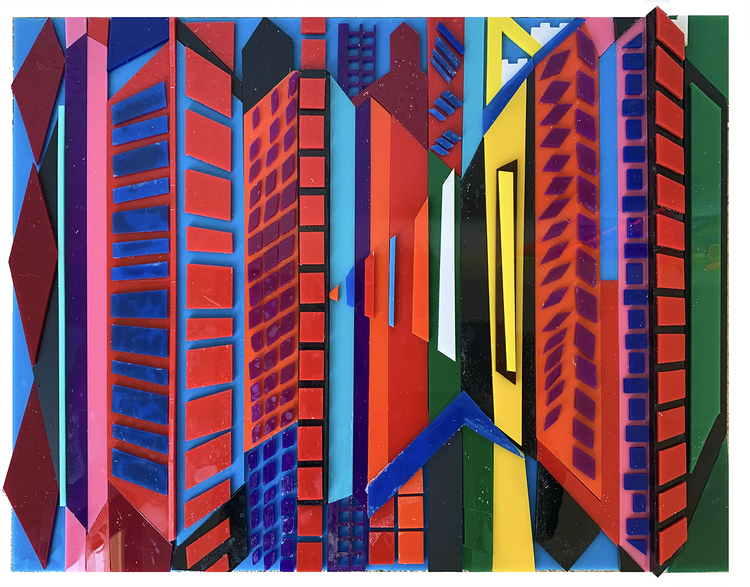 Susan Cooper - "Finding My Sea" and "Get out of NYC"

When the Covid19 Pandemic began my mind went blank in the studio. There was too much to think and worry about. The only sensible thing to do in my studio was to clean it. Over the years I have created projects using plexiglas. This resulted in piles and several cartons filled with unused materials. I kept them for two reasons. They were beautiful colors and shapes AND they were not biodegradable. I imagined that one day I might break a leg or something that made me sit still for a while and that was when I would do something with all of this detritus. Covis19 never made me sit still. As I cleaned the studio I found thousands of small pieces of the plexi. I began small taking small patterns and putting them together. I matches the resulting pieces with other patterns. They got bigger so I put them into larger panels. When I found an eight foot group of panels left over from a public project they began the background. It is usual to begin small and wind up big. I usually go the other way. I used only shapes that already existed. But eventually began to cut what I had into other shapes. The purpose was to clean my studio of plexiglas and I have almost succeeded. The 2nd purpose was to create something that would give visual pleasure. In Finding my Sea I only used materials as they were and backed them on another leftover piece. I only used curved forms and then created curves. It began to look like an aquarium and since I felt like a fish out of water the title described my predicament. Get Out of New York was created when I was at the stage of putting patterns together. I had not particular image in mind. But I had a son in NYC and he fled in mid March 2020. When I finished the piece it reminded me that I was so relieved that he came to Colorado to get out of the worse part of the pandemic.