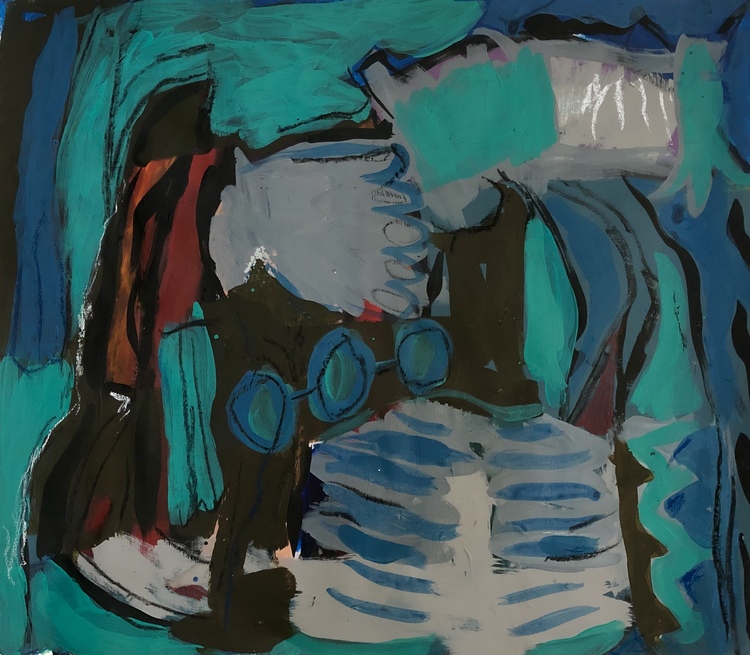 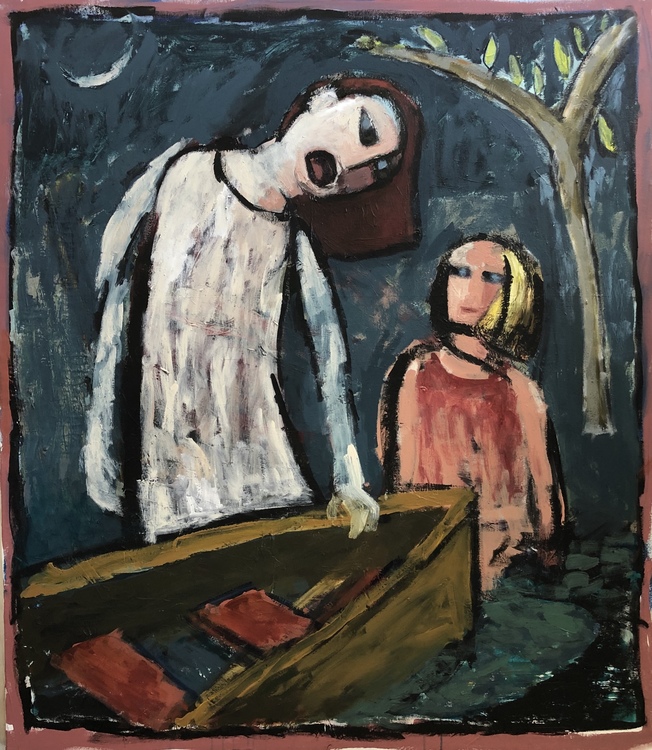 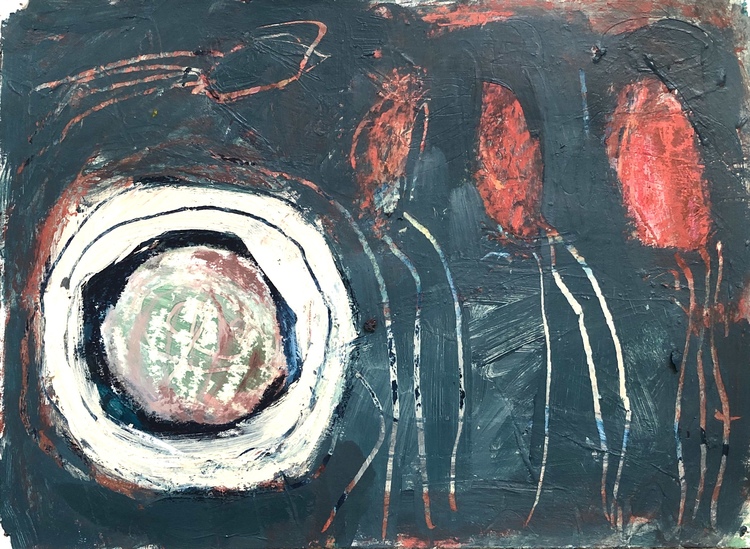 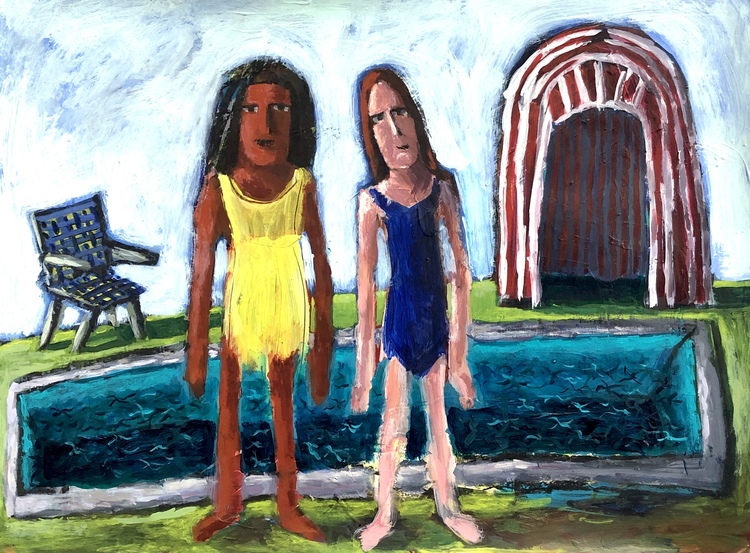 Girls at the Pool Acrylic on paper

Hello. This is Karen Breunig. I have 4 paintings in this show and I’m going to speak first about the first one which is actually the one , which was created first and is called Viral Painting and is a painting I did in about, I would say,  April, 2020. And the painting itself  kind of, was actually something that came out of me very unexpectedly.  It was a painting that I had, was really not that happy with. I don’t even remember anymore what the painting underneath is and it was on the floor of my studio and I mixed up a big batch of that, of this turquoise-teal color and I was playing around with it with gray.  And I little bit of that kind of Indian Red. I found that, there was this ugly painting of the floor that I really disliked.  And I made some marks with the teal and the red and the gray and I then picked up a little blue and made, drew into it a little bit and picked up a piece of charcoal and drew further into it not really knowing, there was not a conscious decision to make this like ribs and a hand but when I stopped and stepped back I saw ,like a ribcage and I saw this gray hand and I thought that this was really an expression of the anxiety I was feeling about COVID and its manifestation as a respiratory illness and the hand is really about the hands of all those medical people that were desperately trying to help and especially in April of 2020, not knowing really how to help, not knowing what was hitting us.  And there was a sweetness too about their attempts to help and it really moved me when I finished it.   I didn’t really know how I had done it.  It was very spontaneous.

The next painting I want to speak about is the very large painting on canvas that is called Pandemic Painting.  And I did this one further on in the summer, I believe, of 2020. By this time...Again this is a painting on top of another painting.  I tend to do that just when I don’t like a painting I paint right over it. This one is an image of a woman in a white, sort of simple gown, holding , seemingly holding the bow of a rowboat for a small girl who is looking up at her with some trepidation, I think.  And the little girl is not sure what to do.  The woman has a very , to me, a very frightening look on her face.  I’m not sure if this woman, what she represents, although I shouldn’t say that.  What I’ve come to think is that she represents the specter of death that I was feeling and we were all feeling so strongly around this summer of 2020 when we were seeing that hundreds of thousands of people were dying in this pandemic and that we still had not much control over it except the measures that we could do personally.  This painting when I first did it, scared me really.  And yet it was expressing the very scary thought I was having about who would contract it next, who would die of it.  I already had an elderly aunt die of covid and was feeling that sadness.  By this time I wasn’t sure who would be next.  Would more family members, more friends, loved one. And The water is rising in this painting and I often, that is a theme in a lot of my paintings.  It’s interesting and of course, we live in the middle of the country with no big bodies of water around and yet I find myself going back over and over again to the ideal of water.  Sometimes as a nourishing, a nurturing element that brings life and health and pleasure.  And other times as a very frightening element that can bring death and suffering. And I find that whole dichotomy about water and about a lot of our natural world to be very fascinating. And I go back to it over and over again in my work. And this painting, I would say, this painting scares me a little bit.  And yet it also intrigues me.

The next painting I wanted to speak about was the painting called Orbiting.  And again, is another painting I painted over  a painting that seemed like a total failure to me. And I think when I paint over a painting that feels like a failure to me , that I just don’t know what to do with it next. When I completely cover it and start all over again with something different, I find it frees me up, that I just feel very free because I have nothing to lose. I’ve already made a crappy painting and let’s see what happens. And this painting Orbiting  was from a painting like that. It’s not a very large painting. Again, it happened very quickly. The pink, the pinkish-salmon color of the three rocket ships, was part of an underpainting so that part I did leave. And then I found, I had been mixing grays again and I have a great love of grays and this felt like suck a rich gray. I just liked it against the salmon color so I covered most of the painting and left, the image that is the planet was actually an image that was I believe Oil pastel. SO when you go to paint acrylic over oil pastel it doesn’t, it won’t stick that well.  So I had tried to paint over that planet and I found it wasn’t sticking so I scraped away and when I scraped away I found again these beautiful images of blotchy greenish white colors and it looked like the surface of a planet, the surface of the moon to me. And again this painting happened very quickly. I love to scratch into paint with the other end of the paintbrush or with different tools I have.  I scratch and scrape paint off.  The trails of the rocket ships are all scratched into the gray paint. The image itself for me, when I was done with it, I felt this sense of that perhaps it meant something about the distancing and the space between all of us that was happening in the pandemic.  This was done in early June and I felt that we were all kind of orbiting our past lives,  the lives we knew and we were all, in some ways, alone out in space, distanced from each other.  And yet space was also, there was beautiful things out there. There was a beautiful planet, beautiful colors. That’s my take on this painting.  It’s been a little bit of an enigma to me.  But that’s how I see it now.  That it’s about how you could be together out there in space but really alone out there in space.

This last painting that I wanted to speak about is called Girls at the Pool.  I did it in early July I believe.  And I found myself doing paintings, after the murder of George Floyd, and the nation having to hold a mirror up to the systemic racism in our society.  I found I think, and this wasn’t something I was doing consciously. In a way it kind of just came up I started to paint paintings that included figures of color, people of color, children. And in this particular painting these are two little girls standing together at a pool.  And I find that,  I”m not sure if it’s my way to have a dream about a time when two little girls can be at a pool, you know, together.  And they have this pool in the back that’s, to me, is inviting.  It looks  cool, it’s a summer day and they’re together because they’re friends. And I guess , it’s part of a dream I have about a more just society where systemic racism is looked at and becomes a thing of the past. And I know it might seem naive and a naive way to address it but quite a few paintings that came out of me at this time had to do with people of color and people of color interacting with caucasian people. And this one, I particularly also was kind of enchanted with the idea of this red and white striped cabana and I wanted very much to create space in this cabana.  A lot of times my paintings tend towards the flat, I tend to flatten space which I find interesting.  In a way, I flattened the pool. I kind of flipped the pool up a bit.   So you’re seeing a little bit more of the bottom,  of the floor of the pool which you usually wouldn’t see.  And yet in the cabana you’re looking straight in, at a deeper space.  And I found that really challenging to do both and to make there be some deep space in that cabana.  That was, in my mind, it felt like this was a safe space for these girls.  They could go there if they needed to be safe, if they needed to be out of the sun, if they wanted to sit together and talk. It felt like an inviting space.  The girls are sort of, I think, have these innocent looks on their faces, in my mind.  I don’t really like to interpret paintings for people to look at.  I like them to find their own story and their own meaning in them. But, and that’s mine.  And frankly, my stories often change, from one month to the next, when I look at a painting . I see more, or I get a different perception. But this painting is a favorite of mine.  I have lots of favorites.) But this one is a favorite of mine.  I love the color. I love the sort of innocence of these girls and the inviting pool and the cabana. And, that’s it. Thank you.