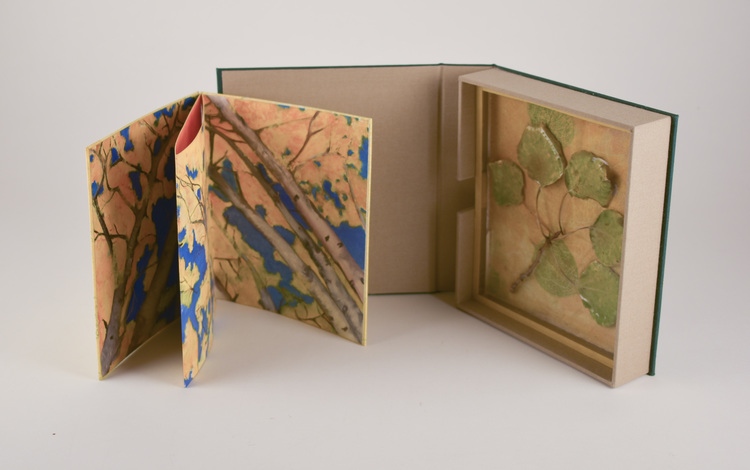 This four panel accordion of sized and painted paper has #150 from Rabindranath Tagore's book Stray Birds. The text appears on both sides of the accordion. The front side is an oil-painted image of golden aspen trees under a blue sky. Cased into book board that has been covered with monoprinted/laser etched paper. Housed in a custom drop-spine box with a dimensional tray base that holds an aspen branch underneath a plexiglass sheet.

Text is from Stray Birds, a collection of epigrams by Rabindronoth Tagore, translated from Bengalese and published in English in 1916.

Text: My thoughts shimmer with these shimmering leaves and my heart sings with the touch of this sunlight; my life is glad to be floating with all things into the blue of space, into the dark of time.

In March I was on a road trip, during which I was researching and gathering materials for a forthcoming limited edition artists book work I'm committed to.

Since my return I've been unable to summon the required focus to conceptualize and design the project. Trying to function without the engagement of an ongoing studio project led me perilously close to out and out despair so I decided to switch gears and create a series using words written by another.

This ongoing project, Stray Birds, uses epigrams penned by by Rabindronoth Tagore, who was a Nobel Laureate for Literature in 1913 and considered by many to India's greatest poet. The book was written in Bengalese, then translated into English by Tagore in 1916. Pointed and pithy, many of these poems celebrate the natural world in a clear and concise way.

Keeping my hands in the craft realm of my studio work has helped me regain the mental focus needed to pick up my abandoned edition project once again. Tagore's words provide a necessary break from what is a stressful series of events, allowing me to stay involved in this world rather than floundering in despair.