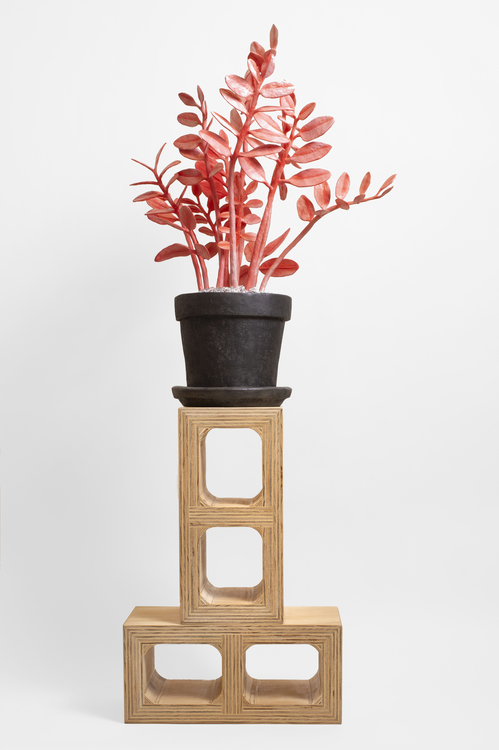 This piece is a paper mache interpretation of one of my favorite houseplants, a ZZ plant. The color is an inverse of it's true to life color making it seem alien, foreign, or even a little uncanny. This sculpture is inspired by an article I read about the houseplant craze among millennials and how a market bubble formed (and subsequently burst) around a certain variety of pothos vine cultivated to be a beautiful shade of pink. At the peak of consumer interest, growers and propagators of the plant charged hundreds of dollars for a single cutting. Millennials are known for their perceived hedonism, poor money management skills, and headstrong behavior in the workplace but in a seeming contradiction, a soft, blush shade of pink has been named in their honor - Millennial pink. To me, this sculpture of a Blushing ZZ functions as a totem of the generation to which I belong.

Like most people, the spread of Covid 19 forced me into retreat. I am still confronted by cancelled exhibitions, wedding plans, and residencies. My jobs as an adjunct professor are threatened by plummeting enrollment, overall instability, and uncertainty.

At the peak of the Covid crisis in March and April, making artwork seemed petty in relationship to the literal life and death struggle into which we were suddenly plunged. I stopped making artwork for a few months, unable find inspiration or a greater humanitarian purpose in my art practice. Why is art important during a pandemic?

As quarantine wore on, I began to find inspiration in my home and in tropes of suburban life. I felt such gratitude for my safe home, my thriving houseplants, the companionship of my pets and my partner. During the Spring it was difficult to get the supplies that I needed to make the sculptural work I had planned, but I stumbled across a recipe for paper mache clay that has inspired a current body of sculptural work, a series of reinterpreted houseplants.

Through the creation of this series I've found an answer to the question that stumped me back in March - it's important to make art in a crisis as a means of documentation. Not so much as a documentation of events as a record of the feelings and emotional tenor of the time. The art made during this time is a collective vision, a group memory, and as such serves as a physical representation of a greater emotional resonance.

Prev Next
Viral Influence: Art in the Time of Coronavirus
HOME