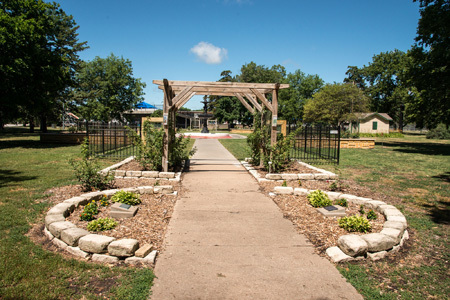 The American Legion in Manhattan is named for two local veterans who died in France while fighting as part of the American Expeditionary Force during the First World War: Lieutenant Clede R Keller and Captain Willis L Pearce.  Both men are honored with plaques located at the entrance the City Park's Rose Garden.  Click on the image to the right to view their plaques.

Captain Willis Leroy Pearce, Sr was born in 1882 in Smith Center, Kansas.  Pearce served as an officer in Company F, 142nd Infantry, 36th Division. He was killed in action on October 8, 1918 while serving in the 36th Division's efforts to push the enemy from the area north of St. Etienne-a-Arnes (specifically, Hill 140) back to the Aisne River.  Awarded the French "Croix de Guerre" (Cross of War).

First Lieutenant Clede Rex Keller was born on March 15, 1892 in Webb City, MO.  He died on September 29, 1918 in the Argonne Forest, France.  Keller's military service began on March 10, 1911 as a private in the Kansas National Guard Company First Regiment at Manhattan, Kansas. He was commissioned Second Lieutenant by Kansas Governor Arthur Capper on February 4, 1915.  Keller was later promoted, on October 1, 1915, as First Lieutenant of Cadets at the Kansas State Agricultural College. During the latter part of 1916, he saw active service on the Mexican border.  He was mustered into federal service, on August 5, 1917, and received a first Lieutenant commission in April of 1918. Keller's service in France was with the 137 Infantry Regiment 35th Division. Lieutenant Keller died of wounds received in action on September 29, 1918 and is buried at the Meuse-Argonne American Cemetery in Romagne, France.